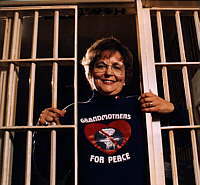 Barbara Wiedner (1928-2001), Founder Grandmothers for Peace, a non-profit organization, was formed in May of 1982 at the height of the Cold War. In 1981, I became aware of 150 nuclear weapons at Mather Air Force Base — just 15 minutes from my home in Sacramento, California. Those weapons, aimed at the Soviet Union, and similar weapons in the USSR aimed at the US, made me realize that if things did not change, my precious grandchildren could be part of the last generation on earth. That thought catapulted me “out of my kitchen” to join others at the gates of Mather in protest of the nuclear arms race. My granddaughter made me a sign that read “Grandmother for Peace” which I held at weekly protests. That sign attracted a great deal of attention from the public and the media.

In April of 1982 I was arrested (the first of many times) for an act of non-violent civil disobedience. The media was captivated by the image of a grandmother risking jail in an effort to save the planet from nuclear annihilation! During my 5 days in jail, I realized that grandmothers have a very powerful and important role to play in the struggle to eliminate nuclear weapons from the face of the earth. I decided to form a group called “Grandmothers for Peace.” In May, eleven women gathered in my living room to declare ourselves “Grandmothers for Peace” — we had $11.00 in our treasury at the end of the meeting!

In the beginning we felt our most important role would be to support other local peace organizations in their work, and to maintain a weekly vigil at Mather. Very soon it became clear that we also had a unique voice of our own and that our group had universal appeal. News of our activities spread rapidly by word of mouth and news reports. Soon we had members & supporters across the nation and around the globe. We added a Men's Auxiliary, and by 1990 we officially added “International” to our name reflecting our international scope.

Our work has expanded to include the dangers of nuclear power plants; radioactive waste; sub-critical and computerized nuclear testing (now that underground testing has been banned); the nuclearization and weaponization of space; global militarism that continues to drain desperately needed resources from programs that enhance life; and other peace and justice issues that effect the human family. In spite of some progress, nuclear weapons continue to threaten the fate of our planet. The abolition of nuclear weapons remains a top priority.

Those of us with the time and the energy have become activists — marching; protesting; visiting our elected officials; giving speeches to motivate others to action; publishing international newsletters and other materials; and even committing acts of civil disobedience when all else fails. “Stay at home” members help keep our work alive by writing & calling elected officials, circulating petitions, keeping us in their prayers, guiding their grandchildren in the ways of non-violence, and helping to raise funds for our Peace & Justice Scholarship Awards, plus other specific humanitarian efforts we adopt.

GFP has helped a multitude of good causes around the globe, e.g., The Jabalya Maternity Clinic in Gaza; Hospital San Carlos, serving the poor Mayan Indians in Chiapas, Mexico; The City of Hope and Reconciliation in Matagalpa, Nicaragua; Women's Centers in refugee camps in the former Yugoslavia; and poor and ailing widows in Semipalatinsk, Kazakhstan, the former Russian nuclear test site.

In most cultures around the world, grandmothers are revered as the “keepers of the peace.” We are inspired and motivated by that fact, but realize that in today's dangerous world we can no longer keep or promote peace by sitting in our rocking chairs!

We remain an all-volunteer organization and prefer to maintain an informal structure that encourages others to start, with very little effort, Chapters in their communities.

The world is a safer place “in grandma's arms,” but one need not be a grandmother to participate in our work. Join us!